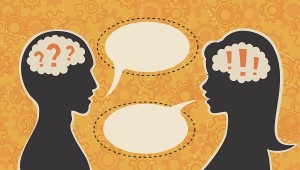 Dialogue reveals character and the relationship between characters. No two people speak alike and you should try to give your characters a verbal as well as a physical distinctiveness. Do they use a certain turn of phrase? A slang word? A swear word? Do they stutter or um and ah? Are they pompous or verbose?

Dialogue is also a means of exposition (communicating essential information to the reader about the background of the story) and is one of the basic ways of activating your text by  showing not telling. That may sound strange but allowing a character to tell the reader something rather than just narrating it in the text, is a legitimate means of ‘showing’.

One of the most difficult aspects, for me, in writing realistic dialog has been making the non-POV character's speak realistically.   The problem rises from all the little nuances in socializing.   It is difficult to portray the thoughts of a character who is not your POV, so during a general draft, I find I often end up with rather stale characters.   I have discovered a way to ease this process.